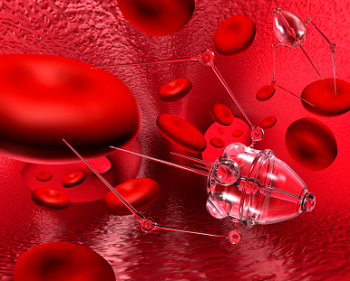 More often, fiction delights in taking nanotech way, way beyond the plausible. Nanomachines, "nanites" or "nanobots" are a writer's best friend. Writers are not expected to show the nanomachines doing whatever it is that they do, all they have to do are the results. And the results can be anything. Nanomachines can be depicted as masses of cloud/liquid in external "colonies", Voluntary Shapeshifting Blobs, or syringes of stuff to be injected into humans and have fantastic results, usually in the form of superpowers, but sometimes in the form of a Forced Transformation, Unwilling Roboticisation or Harmful Healing.

Nanites themselves will usually either be dumb as bricks, or networked into a fully sentient mass. Some works may invoke Mechanical Evolution to make the nanomachines smarter/better/deadlier. Scale them up a bit and you've got a Microbot Swarm.