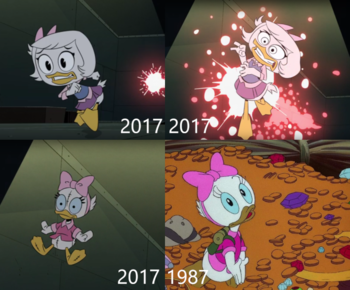 Webby's original design used as an offensive weapon by Magica De Spell.
Liu Kang: Are we the Deadly Alliance?
Raiden: That is Kronika's deception.
Liu Kang: Or a recipe for Armageddon.
— Mortal Kombat 11
Advertisement:

A Mythology Gag is a reference to past iterations of a work that are explicitly not Canon to the work in question. A meta-Continuity Nod, if you will. Often seen in Reboots or Series Franchises when an element from the previous version is referenced or seen in some way, usually as an acknowledgment to fans of earlier incarnations. When successful, it serves as a reassurance to those fans that the producers aren't trying to disrespect the original source material. When unsuccessful, it only reminds fans that the original source material essentially never happened.

This trope is usually taken largely as a bit of gratuitous humor, since if the program you're watching is "real" then the characters shouldn't be thinking in terms of any continuity, alternate or otherwise. Sometimes this will be lampshaded by the characters, who wonder how they could possibly know such a thing. Also, the Celebrity Paradox might come into play.

See Remake Cameo for when the Mythology Gag involves actors from the original production. Compare to: Continuity Nod, Discontinuity Nod, Recurring Element, I Want You to Meet an Old Friend of Mine, Actor Allusion, Continuity Cameo, Company Cross References, Ascended Meme, Meet Your Early Installment Weirdness (when taken a step further) and Shout-Out. Contrast Development Gag, which references things that would have been part of the work but were left out halfway through production, and Early-Bird Cameo.

Remember, it's only this if the events happened in a different continuity. Otherwise, it's a Continuity Nod or a Call-Back.

Rem recites the same words she used on Subaru to Aqua. The irony is not lost on him.

Rem recites the same words she used on Subaru to Aqua. The irony is not lost on him.