Must Be Invited
aka: Vampire Invitation 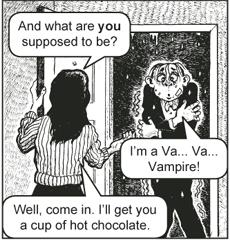 Hospitality that can come back to bite you.
"It's not like Dawn hasn't grown up in this house knowing all the rules. Especially the biggie, Numero Uno: Do not invite blood-sucking dead people into our home!"
— Buffy Summers, Buffy the Vampire Slayer, "Real Me"
Advertisement:

Going back in various mythologies is the idea that supernatural beings — such as vampires, ghosts, demons, witches, what have you — cannot enter into a home unless invited to do so. Often such beings will try to gain entrance by tricking a person into believing they are someone else. Once invited, don't expect locked doors to be an obstacle to their entry.

This trope is very old. Traditionally, this trope applied to mythical creatures in general, and there's a load of things that are supposed to invite them in, like putting new shoes on the table, or bringing white hawthorn into the house. Now you know.

Its applications to different types of supernatural creatures have expanded over the years. More often than not the original conceptions of these mythical creatures are identifiable by this trope. Today, this requisite is almost exclusively associated with vampires, a mark Dracula left on vampire fiction, but there are a few other creatures that this trope pops up for on occasion; ghosts, demons and fairies being among the most common.

Interestingly, the definition of "home" in this case can be rather loose; a temporary/mobile shelter like a tent, or a resting place (tomb/crypt) are included as long as the person hiding there is its owner or resident. To compensate, the invite may come from anyone within (like a servant or another guest), and any house where the visitor has been previously (while still alive, for instance) is fair game.

For any story that examines the trope in detail, expect to see creatures dealing with common buildings where the public is invited, invitations are explicit or implied, and the concept of revocation of invitation to be played with. A particularly common gag involves the implications of putting a "Welcome" mat outside your door.

Sub-Trope of Supernatural Repellent. Related to Sacred Hospitality, which also treats the etiquette of hospitality as Serious Business. Invited as Dinner, in which the predator invites the unwitting prey instead of the other way around, can be considered an inversion of the examples regarding vampires. For supernatural beings that ask for hospitality, see Angel Unaware.