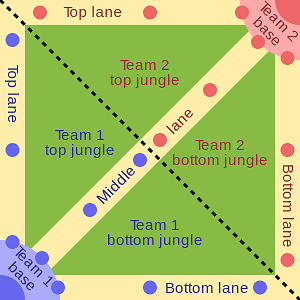 Typical map of a MOBA. Mid or I feed!
Erik: Seventeen years of nothing, and they bring us back for a MOBA! Ha, figures.
Baelog: It's not a MOBA, it's a hero brawler!
Olaf: Hero brawler herba heybee, you made that up!
Erik: Nope, but Blizzard sure did!
— The Lost Vikings, Heroes of the Storm
Advertisement:

The Multiplayer Online Battle Arena (MOBA), also known as ARTS (Action Real Time Strategy)note increasingly rarely due to the rise of FPS or Third-person MOBAs or Hero Brawler, is a relatively new game genre popularized in the first decade of the 21st century. While the Ur-Example was the Sega Genesis classic Herzog Zwei, the Trope Maker was Aeon of Strife, a map for Starcraft. It gained popularity and, when Warcraft III with its powerful Hero Units and amazing map editor came out, spawned a lot of similar maps which were referred to as AoS-style maps. Amongst others there were D-Day, various AoS direct ports, and Defense of the Ancients, developed by Eul. One of its own spinoffs, Defense Of The Ancients Allstars developed by Guinsoo, became the Trope Codifier by virtue of its astounding popularity, with a non-negligible fraction of Warcraft III sales driven solely by people who wanted to play DotA Allstars.

The heart of the MOBA genre lies in several basic qualities. First, it is relatively easy to play, being (typically) controlled through a point-and-click Real-Time Strategy interface but giving the player control of only one Hero Unit, with four or five skills, instead of a Command & Conquer Economy. In comparison of the other RTS games, this also makes the controllable character feel more unique and individual than just generic characters (which is quite ironic, because as far as this genre's plot goes, it's basically Excuse Plot). The player is assisted by a computer-controlled base and its minions, as well as four (sometimes two) Player Character teammates, each controlling their own Hero Unit, with the opposition consisting of the same. Second, it has many characters, making it easy to learn but difficult to master; not only is each character unique in its skills and abilities, but the large number of characters results in unique team compositions, with varying levels of synergy between them. Third, the objective is not to rack up enough kills, but rather to destroy the enemy's base. Killing the enemy heroes helps you with this, but is not a necessary step. Finally, Competitive Balance dictates that no Hero Unit can ever become powerful enough to win the game single-handedly; each character (or player) is deliberately limited in what elements they can contribute to the victory (crowd control, damage output, tanking, healing, etc), which is especially important once the teams start aggregating for five-on-five brawls. The result is a high emphasis on skill and teamwork, where communication and intelligent gameplay inevitably win out.

For more details on how a MOBA played out in general, check the Analysis page.

The games that incidentally possessed certain game elements that would inspire the creation of the first iteration of a MOBA. Pretty much the prototypes of the genre and they were created not to make this genre in the first place.

The game that eventually grew too popular and launched the genre. The one that started it all.

Currently considered the cream of the crop and the most played games, more likely to get a lot of streamers on the video or rated as the best MOBAs to date, and more likely to have E-Sport presence. They held the greatest popularities and standing power through The New '10s, the era where MOBA took stride, and still continue to do so.

These titles are somewhere in between the overwhelmingly huge gap between the Big Three and the other niche and/or short-lived MOBAs. At their prime, they were well-liked and popular enough to actually be considered a contender... until something happened. While they no longer have the influence they used to, even past their prime, they generally enjoyed more success than others.

The Fledging Ones and the Cult Ones

These MOBA are very much playable and have a chance to be a fan favorite, except they tend to lay kind of low, either not attracting E-Sport scenes, or they're not out of alpha/beta phase yet. But they still live.

Mobile platforms has a vastly high adoption rate. Therefore, it was perfect ground for the wildly popular genre and several of the mobile MOBA games have gained a great deal of popularity.

The genre turns out to be a very harsh competition between producers, so there are some that that have been killed and sent to the graveyard of Defunct Online Video Games. Some of them managed to make themselves known before being put down though.

Baelog: Ugh, you guys are so getting us fired, do you know that?