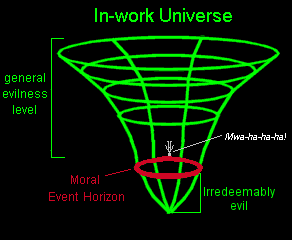 Once they cross that red line, there's no turning back.
"Tarkin, if ever there was a shred of humanity in you or these twisted creatures of yours, it's dead now. You're at war with life itself. You are enemies of the universe...your Empire is doomed."
— Princess Leia Organa (after Grand Moff Tarkin wipes out Alderaan), Star Wars Radio Dramas
Advertisement:

The Moral Event Horizon is the deed that renders a villain irredeemable. Named after the event horizon of a black hole, it is no longer possible for a villain past the Moral Event Horizon to be redeemed. If they try to, it will be rejected, ignored, or otherwise prevented from succeeding. If they do redeem themselves, then they never actually crossed it in the first place.

Note the word irredeemable at the beginning of this article. It is a demonstration of permanent evil. This is the moment which confirms that this character will always be a bad person. The moment where you realize that it's simply not possible for them to cleanse themself of their guilt. The moment any Freudian Excuse they may have loses all meaning. Their existence is a blight on humanity. They. Are. Evil.

The deed is characterized by the following aspects:

When people decide in-universe that someone has crossed this line, the character in question is considered Beyond Redemption. The Good Counterpart to Moral Event Horizon is Heroes' Frontier Step, when a character commits a noble deed that firmly establishes that they are indeed heroic and even pure.

No Real Life Examples, Please! Whether or not a real person has crossed this line is way too debatable and controversial; we already have enough trouble with fictional characters.

Advertisement:
open/close all folders
Compare with
Contrast with

Ragyo experiments on her own children when they were babies and when one of them seemingly dies she throws it into the trash and leaves it there. This action causes Satsuki and Ragyo's husband to go against her.

Ragyo experiments on her own children when they were babies and when one of them seemingly dies she throws it into the trash and leaves it there. This action causes Satsuki and Ragyo's husband to go against her.