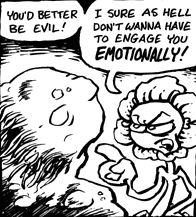 Bob knows this trope.
"...But I also came into existence, so you could go preserved and unscathed. I am the sole empty purpose of being a trash receptacle for everything you couldn't handle."
— Dictator Pickles, Alfred's Playhouse

Monsters and villains in works of fiction aren't usually made to invoke sympathy. Engaging a monster emotionally as someone would another person diminishes the terror and revulsion villains are supposed to evoke. However, this isn't the case if the villain has a Monster Sob Story. Basically, this is a villain who gets a moment when, to everybody's surprise, he's cast in a somewhat sympathetic light. His motivations and emotional state are explored, and the audience finds itself pitying (if not identifying with) the villain. They may be a Smug Snake or Magnificent Bastard, but the reader/viewer feels sorry for them. The heroes themselves may even feel pity. The experience ends up giving the villain a level of characterization that goes beyond what a villain doing things For the Evulz usually gets.

Unlike the Woobie, Destroyer of Worlds, or the Anti-Villain, this villain was already evil long before— and will likely remain so, despite anyone's pity. May be an Ineffectual Sympathetic Villain. May also bring about Badass Decay or Villain Decay if not done well. This is not to be confused with a Villainous Breakdown containing a Motive Rant, which usually occurs after the villain has suffered a setback or is almost defeated. Here, the sympathy is more triggered by the villain's goals or feelings rather than any pain the villain is going through himself. If the villain simply chokes out "I had a terrible childhood!" and then dies, it's Alas, Poor Villain.