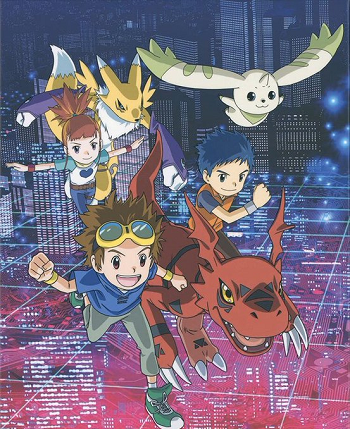 To catch them is my real test, to train them is...wait, wrong show.
"Green tea from Iemon
Pikachu from Pokémon
Yu-Gi-Oh!'s duel mons
Oyama Nobuyo as Doraemon
Yes, in this world many different kinds of mons are known to exist."
— Hyadain's Ganbare Goemon
Advertisement:

A Monnote short for "monster", as in Pokémon (Pocket Monsters) and Digimon (Digital Monsters) is a creature, generally summoned by magic or sufficiently advanced science means, which fights on behalf of its summoner. This allows characters to fight each other without actually fighting themselves; instead, they conjure an avatar—perhaps a beast or a machine—that fights for them. Sometimes only one side will have Mons, so the characters on the other side directly fight the Mons. Wild Mons—those uncontrolled by anyone—are also known to appear.

Mon range up and down the scale in terms of intelligence, power, and appearance. Some are almost mindless, while some are far, far smarter than their so-called "masters." Likewise, whether they're servants, partners, or just another race depends on the series.

Good relations with Mon are recommended, as The Power of Friendship usually serves to make your Mon more powerful and loyal to your cause. Apathetic or cruel treatment, on the other hand, may cause them to run away, turn on you, or even (if they are powerful enough) bring about The End of the World as We Know It.

Expect the majority of Mon works showing the human barely doing any contribution to the fighting while hogging all the Character Development, with the Mons in question being Satellite Characters. Contrary to popular belief, the focus is on the humans for the most part, not the titular Mons, no matter how interesting and sapient the latter are.

The types of Mons tend to vary series to series, but there are some common themes:

May overlap with Our Monsters Are Weird if the roster of creatures is big enough. Also a type of Attack Animal. Occasionally, some Mons may get an Inconvenient Summons (no pun intended). The first Mon that a character gets is a Starter Mon. Jarringly-powerful Mons are Olympus Mons, while totally pathetic ones are Com Mons. Mons often feature Elemental Powers used in Elemental Rock–Paper–Scissors gameplay and general exploration. A character's main Mon is their Signature Mon.

Compare and Contrast Cool Pet as well as Summon Magic. See also The Beastmaster and Bond Creatures. May function as a Guardian Entity. Contrast with Kaiju, giant monsters defined by not being under the control of humans or other summoners.

For an index of works based around this trope, see the Mons Series index. For those who want to start their own, we have a handy guide on writing one right here.

Not to Be Confused with mon,

a historical currency in Japan, mon,

a Japanese symbol similar to a coat of arms in European heraldry, a Belgian city, or the mons veneris, for that matter. Also, nothing to do with a stereotypical Caribbean accent.

Here are a bunch of Mon Tropes: