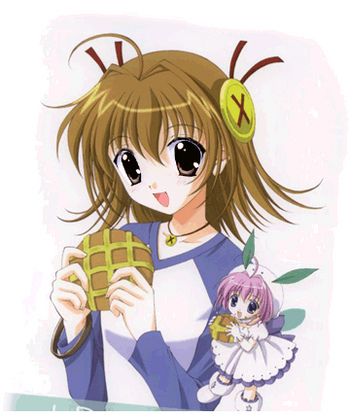 Now who can say "No" to a face like that?
Advertisement:

So you're a male loner in high school, and you've been single for such a long time that you can only imagine a sweet Moe girl (of the Manic Pixie Dream Girl bent, of course), could save you from loneliness. Now you intend to draw her.

Well, we know what you think. There's no denying that this is your first basic idea of what she will look like:

That's why this vaguely coquettish facial expression is now worn by almost every female character in moe series and has become ubiquitous in series' promotional materials.

The next facial expression you will draw is going to be the Moe Squint, because she is full of wacky quirks and idiosyncrasies.

If you are looking for those other "Moe Stares" played for sympathy, see Tareme Eyes or Puppy-Dog Eyes.