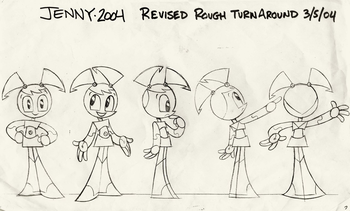 Drawings made in the development of character and mecha designs for animation, comics, and other artistic works where the same character or device needs to be drawn repeatedly. Used to finalize a character design, and provide a set-in-stone standard for reference by entire teams of animators and storyboard artists. Despite the name, there is usually more than one sheet involved. Sometimes called control art. It's based off the last revision of the Concept Art. There's a set done for every costume and hairstyle used for every character in a series, with varying levels of detail. The cost associated with this is a big reason for an Economy Cast who appears in a Limited Wardrobe. If the artists wander away from it, they have gone "Off-Model".
Advertisement:

A set of these will also exist as a guide for the model maker in a 3D CGI production.