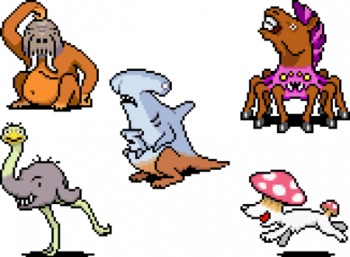 "I made this half-pony half-monkey monster to please you,
But I get the feeling that you don't like it.
What's with all the screaming?
You like monkeys, you like ponies.
Maybe you don't like monsters so much.
Maybe I used too many monkeys.
Isn't it enough to know that I ruined a pony making a gift for you?"
— Jonathan Coulton, "Skullcrusher Mountain"
Advertisement:

Another common variant is to make a Punny Name of a real life animal named after a different animal: for example, a "catfish" that is literally half cat, half fish. For those cases, see Pun-Based Creature.