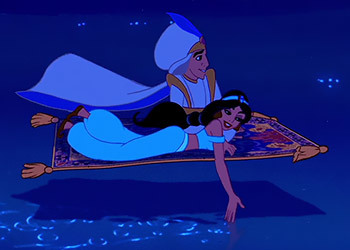 So a character, most likely via a flying vehicle/creature or a newfound ability, is experiencing the wonders of flight for the first time. Sooner or later, their joyous moment may bring them somewhere over a body of water. When that happens, there's a good chance that they will decrease their altitude just enough to be able to reach out and touch it with their hand or fingers. Especially common during the Flight of Romance.

It does not necessarily have to be the character's first flight, or that the water has to be touched specifically with their hand — the trope mostly refers to the general act of touching or splashing the water while having fun flying.

It should be noted that this is a possible example of Television Is Trying to Kill Us. If you are ever in this situation of flying in an open vehicle — somehow — dragging your fingers through a thicker fluid is an easy way to fall off-course or lose a finger. Per the general theory of relativity, this interaction is the same as the water moving and you standing still, which can be replicated by sticking your hand under a rather large waterfall.

If a vehicle skims the surface of water because it's on the brink of a crash, that's Belly-Scraping Flight.