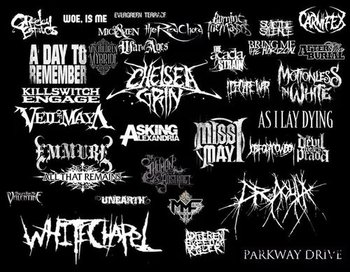 Metalcore (also known as "metallic hardcore" or erroneously referred to as "screamo", names given to the more punk-influenced bands) is a combination of Heavy Metal, Thrash Metal and Hardcore Punk, and sometimes takes a more melodic approach to the songs than thrash. It is characterised by gratuitous use of the Metal Scream, as well as breakdowns. Lots and lots of breakdowns (although due to, ahem, certain bands, this attribute has been Flanderized a bit). If you're not in the know, a "breakdown" is when the music kind-of slows down to induce moshing or "throwing down"...or something like that. (Illustrated

with Helmet's cover of the Gigantor theme - the breakdowns are at 1:16 and 2:42.) Modern bands often tend to mix it up with clean vocals and melodic riffs (see Melodic metalcore below).

Metalcore began life as a blending between thrash metal and hardcore punk, and was used to describe bands such as D.R.I., S.O.D., and Suicidal Tendencies in the 1980's, however the term changed its meaning in the 1990's to "metallic hardcore", and the genre metalcore originally defined became known as "crossover thrash". This newer "wave" of metalcore included bands such as Integrity, Earth Crisis and Converge. By the end of the nineties, metalcore had evolved into "melodic metalcore", which slowly grew in popularity until the mid-2000s, when it was a big mainstream draw. In fact, today, metalcore is the most commercially popular form of metal.

There are several common styles of metalcore. These include:

Bands typically cited as metalcore include:
open/close all folders
Early metalcore/Metallic hardcore
(includes beatdown hardcore and newer bands playing in the style):
Mathcore & Experimental metallic hardcore
Modern/Melodic metalcore
Beatdown Hardcore
Entombedcore
Nu-metalcore
Bands confused for Metalcore
The following bands are often called metalcore, but are very much not metalcore. We keep this short list here because we don't want these bands put on the main metalcore list by an earnest passerby.