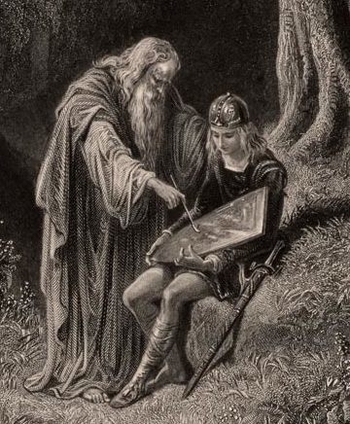 "Kara, when I first came here, I was confused too. Able to see into the past, the future, yet not having a clue what to do with my own life. A harbinger for everyone but myself. Diana took me in without hesitation. If you need someone to turn to, you can trust her."
— Lyla on Wonder Woman, Superman/Batman: Apocalypse
Advertisement:

This character is better skilled, faster and more experienced than their student and they're passing those traits on to the student. They may have grown too old for the task or have their own job to do. Their role is to introduce a new skill or sharpen the current skills of their student, often hoping to pass the torch because they know their career is coming to an end. This character may die, so that their student can learn to stand on their own two feet. Very often this role is performed by an Old Master, Spirit Advisor, Wizard Classic, or Hermit Guru. Expect them to have the same elderly, but powerful look associated with the Grandpa God unless you're dealing with Younger Mentor, Older Disciple, which subverts that expectation.

Named after Mentor, Telemachus's elderly advisor in The Odyssey, who was actually Athena in disguise. For more information concerning "The Mentor" and other narrative archetypes, see Vladimir Propp's theory of narrative.