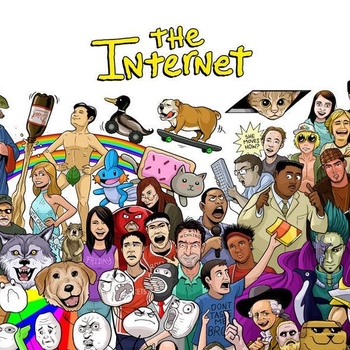 ◊
"Most of what is unusual about man can be summed up in one word: 'culture'. I use the word not in its snobbish sense, but as a scientist uses it. Cultural transmission is analogous to genetic transmission in that, although basically conservative, it can give rise to a form of evolution."
— Richard Dawkins, The Selfish Gene, Chapter 11

(rhymes with "cream") is usually described as a catchy derivative of some aspect of pop culture, parodied and repeated over and over. If not used carefully, it can get to the point that its origins and original meaning become muddled and completely mutilated beyond any point of recognition or humor. It can even be Wrongfully Attributed. It's essentially a cross between a catchphrase and an inside joke.

Another quirk of memes depends on where they're initially propagated. Memes often spread regardless of content, taste, or sensibilities, while the original source may be the only ones who know enough about the source material to use it ironically. Furthermore, some memes reference something common, but become catchy enough to be associated with only a single new thing.

Depending on how strongly the production company is tied with fandom, sometimes a meme can escape the internet and get referenced in the medium it parodied through Bonus Material or Popularity Power. When this is the case you get an Ascended Meme. Some forgotten or Discredited Memes are even resurrected thanks to the Popularity Polynomial.

Note that while this article refers to internet-based memes, the phenomenon is not just limited to the internet. It can be an instance of The Catch-Phrase Catches On, which is when a phrase or saying from fiction becomes popular as an expression used in Real Life. However, certain memes are only popular to a certain group.

If you'd like to keep up with the memes of the day, go to Know Your Meme, or The LURKMORE Wiki

The Trope Namer (for the word meme) is Richard Dawkins, who suggested a Mind Virus-like model of society: that cultural information is inherited and reproduced, occasionally with minor mutations, in a similar way to genetic information.

It goes with everything.

It goes with everything.