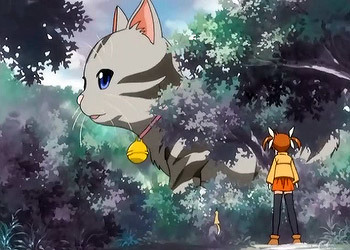 "That... is one giant pussy."
— Yuri Hyuga, Shadow Hearts: Covenant

Exactly What It Says on the Tinnote in two languages that are not English: Really Big Cats.

This trope is about cats that are exceptionally larger than is the norm for their species. For the standard "lions and tigers" variety of big cat, see Panthera Awesome. Fictional Cat Folk species do not count for this trope, however big they may be.

The name is a combination of Mega- from Greek megas, meaning large or great, and Neko from the Japanese word for cat. It should not to be confused with Meganekko (two Ks, one word), which is about how bespectacled girls are cute. However, do compare with Cute Kitten. If this trope and Meganekko do overlap, she'll be a Cat Girl. Subtrope of Dire Beast.

Just the thing for dealing with Rodents of Unusual Size, but be wary of Canis Major. Subtrope of Animals Not to Scale and/or Cute Giant.