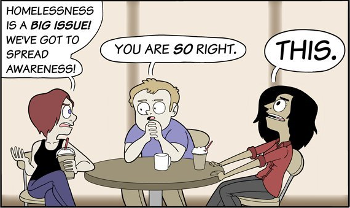 If The World Worked Like the Internet Thinks It Does
"And posting 'Me too!' like some braindead AOLer
I should do the world a favor and cap you like Ol' Yeller
You're just about as useless as JPEGs to Helen Keller..."
— "Weird Al" Yankovic, "It's All About the Pentiums"

A person, who when replying to a message on a forum habitually says nothing more than "Me Too". This can take any variation, such as "Seconded," "This," "Damn straight," etc. Often on Fora such as email lists and Usenet, they will include the entire contents of the message they are replying to.

Roundly decried for wasting people's time and, in places without broadband, bandwidth. Some Fora, with borderline support for the site's monthly traffic, will ban posts like this just to keep the site up and running!

AOL's subscribers gained such a bad reputation for this after getting access to Usenet in the middle 1990s that the use of AOL! or the pseudo-HTML markup <AOL!> is a widely known shorthand for Me Too.

"+1" is a modern Web-2.0ish variant; while it is sometimes a legitimate idiom for "I agree this is important", it is often used where it is not welcome.

One variant is a reply consisting solely of the auto-quoted text, trimmed to the agreed-with content in question. Some forums allow users to get away with this via Rule of Funny, though it is still frowned upon by many. A common equivalent, usually used in IRC, is to reply with a caret ("^") as to represent an arrow pointing to the text they agree with.

One accepted use is in discussions where a consensus need to be established. In those cases a vote is all that's needed, and unless a new argument is presented, the text is just the same kind of filler.

A similar phenomenon is the poster who feels that posting the first response in a new discussion is a triumphant achievement, and will often post for nothing but the sole purpose of being that first response. Often followed up with cries of "second", "third" or "fourth" from other like-minded people who were a little too slow on the draw. This also applies to sites whose message boards have a pre-set limit on posts in a topic. When the topic is about to reach the post count where it will close, many posters will interject with meaningless posts just to be the one to 'kill' the topic.

More recently, the meme #MeToo gained widespread use on social media to denounce sexual abuse, misconduct and harassment, particularly after several notable figures in entertainment, news media and political circles were accused of said behavior, often by people they had worked with and had come to trust them. The idea was that its users would use it to state that in some fashion they had also been victims, and not necessarily by famous people, and that they sometimes wished to remain anonymous with specific details. For details on the various figures accused of such actions, see Role-Ending Misdemeanor (even if it goes way beyond "Misdemeanor").

If you're looking for the British children's show, it's here.