Masquerade
aka: The Masquerade 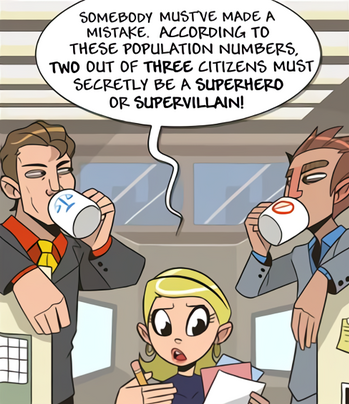 Agent K: We do not discharge our weapons in view of the public!
Agent J: Man, we ain't got time for this cover-up bullshit! I don't know whether or not you've forgotten, but there's an alien battle cruiser that's about to—
Agent K: There's always an alien battle cruiser, or a Corillian Death Ray, or an intergalactic plague that's about to wipe out life on this miserable little planet. The only way these people get on with their happy lives is that they do. Not. Know about it!
— Men in Black
Advertisement:

The setting, the geography, etc. should somewhat resemble the viewer's. The newspapers will have the same headlines, the cities will look the same on the surface, etc. But... hidden below it all, what's really going on is far different. This trope is a tool of the writers to engage Willing Suspension of Disbelief and ensure Plausible Deniability.

At its most basic definition, whatever supernatural or extraordinary groups in the series, often an Ancient Conspiracy (or at minimum Monsters Anonymous) of some sort, must hide their existence from consensus reality, and anything is permitted to maintain this: Laser-Guided Amnesia, Brainwashing for the Greater Good, even shaping the natural laws to make themselves Invisible to Normals. If a whole secondary society exists secretly adjacent to the mundane world, that's a Wainscot Society.

The in-setting reason for this, when one is provided, is usually some version of "society in general would object to said group's very existence", more or less plausible according to the writers' skill. The real-life reason is typically that the story is intended to be set in "our" world, and the streets of Anytown USA might seem a bit less familiar if they were filled with vampires and witches and the like who were making their presence obvious. The Masquerade makes it easier for the fans to imagine what it feels like to live as a "normal" person in the setting.

Sometimes, especially in more cynical series, Bystander Syndrome or The World Is Not Ready are used to explain why the Masquerade persists, even if the heroes don't necessarily want it to continue. On the other end, maintaining the Masquerade usually requires morally gray or outright black choices, like discrediting or killing the Crazy Survivalist and Agent Mulder trying to expose it. Even if the character protecting the Masquerade doesn't turn evil doing it, he's likely to end up isolated. The tensions of their role usually engender a bad reputation and kill off their love life.

People who discover the masquerade have several choices that present themselves to them, potentially including:

Real-life technology advanced from 2000-2010 or so to make Plausible Deniability much more difficult for modern authors than 20th century writers. Cell phones went from "punchline for comedians to mock rich bankers" to "item nearly everyone has, worldwide", and they have cameras. Rather than beg the local tabloid to publish a crazy story about how Billy was eaten by a werewolf, the witness to some masquerade breach can merely upload the cell phone video of Billy getting devoured to YouTube, with no potentially subverted intermediaries to convince. As a result, this trope has been increasingly ignored or subverted, although it is still a mainstay of the Urban Fantasy genre.

One variant seen occasionally is wherein the public is deceived with wrong conspiracies — everyone knows that some hidden group is secretly ruling the world, but the real conspiracy uses fake conspiracies to distract the public from the scent. The Men in Black may even spread true rumors with the intent that a Crazy Survivalist will deny them. Without enough evidence to unravel the conflicting stories, the general public only gets a general idea that something is up, and might wrongly blame nonexistent vampires for things that the Illuminati did.

Other times, it seems like the Masquerade is so paper thin that anyone with two brain cells to rub together should see through it, yet the world at large remains oblivious. If that happens you know you're dealing with an Extra-Strength Masquerade. If there is no reason for magical beings to maintain a Masquerade (whether they are so powerful that Muggles are no threat, or friendly enough that there is no need to hide), if in fact it would make more sense for magical folk not to have a Masquerade, then you have the Masquerade Paradox. Taken even further, if the Masquerade is broken in front of the general public with any regularity and yet the public never seems to acknowledge it, then there is likely a Weirdness Censor facilitating that it remain masked. In addition, some Masquerades have a Masquerade Enforcer, wherein reality itself, or some equally invincible force, punishes those that try to go public. Usually though there's Safety in Muggles, with warring factions inside the Masquerade refusing to go into war in the open. Covert warfare, though...

If the Masquerade does manage to get blown wide open for everyone, The Unmasqued World may result. If the masquerading beings aren't remotely human looking, they will have at least one means to pose as human.

The word "Masquerade" appears with this meaning in the 1958 Robert A. Heinlein novel Methuselah's Children, as the code-name which the extremely long-lived Howard Families apply to their efforts to conceal their longevity from ephemerals (the short-lived three-score-and-ten-years majority of the human race). A later example appears in the Tabletop RPG game Vampire: The Masquerade, published by White Wolf Games since the early 1990s (and its short-lived TV series spinoff, 1996's Kindred: The Embraced). "The Masquerade" referred to the necessity for vampires to hide their existence.

Not to be confused with Masquerade Ball, the short-lived (1983-84) television show Masquerade