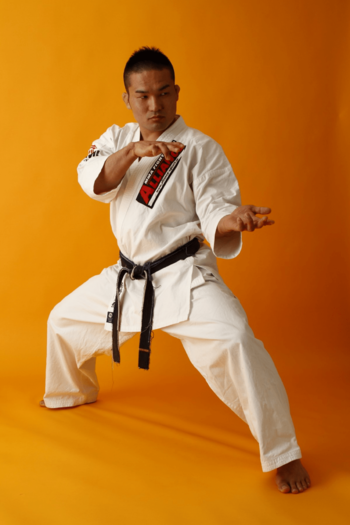 Pictured above: Katsunori Kikuno.
The East, a land of culture, of beauty, and of numerous martial arts. These forms of combat are well known throughout the world, and are respected by many. But we're not here just to talk about martial arts, no, we're here to discuss the uniforms the martial artists use, the clothes that make you say "That guy/girl knows ______".
Advertisement:

This trope is often invoked when a show wants to bring generic martial arts enemies or when a writer wants to show how or why someone is so good at fighting.

Often identified as keikogi, judogi, karategi, dobok, etc. Truth in Television for a large number of martial arts, though not all of them use the "white suit" most often seen.

NOTE: The uniform can be from a totally made-up (or even alien) martial art, as long as the character is wearing the uniform and not his normal clothes. Another thing is that the people wearing these don't have to be martial artists. They could just be pretending, although this is uncommon.