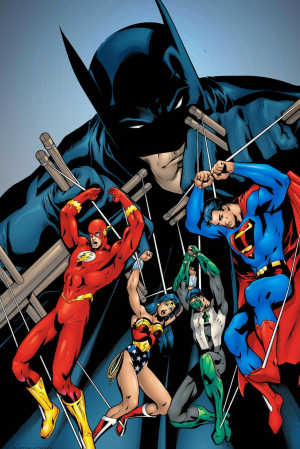 The other heroes always get annoyed when Batman breaks out the puppets to illustrate his plans…
Ben: I can convince him to do it.
Juliet: How?
Ben: Same way I get anybody to do anything: I find what he's emotionally invested in and I exploit it.
— Lost
Advertisement:

While The Chessmaster is the master manipulator of events, the Manipulative Bastard is the master manipulator of people, in essence, a character who manipulates others through their emotions, perspectives, psychologies and any other way they can get them dancing to their tune. This is the person who gets off on playing head/mind games — clever and dangerous and lacking comedic overtones (usually). They always have a plan ready, but rather than do any work, the Manipulative Bastard prefers to play on other characters' emotions and mental states and then watch the victims destroy themselves as they waste their energy on fighting against fake dangers or their friends.

In many cases the Manipulative Bastard personally is rarely emotional and seldom burdened by notions such as empathy, yet is all too willing to abuse it in others. The Bastard is unmoved by the pain of others, if not actively basking in it. Thus the frequent association of how someone who does manipulative bastardry too often can come across as a sociopath. After all, too many Pet the Dog moments may lead this character to become the mask and care about the people they previously saw as playthings.

Like Chessmasters, Manipulative Bastards will have some larger scheme in mind but tend to lose sight of it more easily and simply enjoy the control they have over their peers. A highly-focused/ambitious Manipulative Bastard is scary indeed; not only achieving their goal, but then ensuring permanent supremacy by destroying the souls of everyone they used to get there. A hell of a lot of Heroic Willpower, and often Shooting the Dog is required to topple this character.

While this character type seems inherently villainous, many of them are at least nominally on the heroes' side. A cunning branch of the Anti-Hero family sports this trope and many a pragmatic and/or Guile Hero uses many of the same tricks. Indeed, The Trickster may also overlap into Manipulative Bastard territory. The hero will probably survive a relationship with this character, but their trust in people will not.

Manipulative Bastards often fall into the Karma Houdini trope — after all, they never "forced" anybody to do anything... which leads the audience to scream, "Why do you keep falling for this?" at the other characters.

Different methods of Manipulative Bastardry exists, depending on these characters' favorite tricks to manipulate people:

Sometimes overlaps with Devil in Plain Sight, but is often the "grown up" version, where the "look cute" fallback has become a fairly professional strategy. A Manipulative Bastard who mixes personal manipulation with more complicated schemes, more mind games, and sufficiently scary facial expressions — and does it all with style — can get promoted to Magnificent Bastard. Compare Clock King, who does the same thing with people's schedules instead of their emotions and/or minds. Manipulating people specifically to bring out their worst natures is the mark of The Corrupter. May engage in a Battle of Wits, if anyone can match the Manipulative Bastard. For the much more heroic equivalent, see Guile Hero. Not to be mistaken for a Troll, for whom their manipulations often don't have a purpose other than cruel amusement. See also Opportunistic Bastard. Almost always overlaps with The Social Expert, though not all examples of that trope are manipulative.

When Trixie is angry at losing to the Rainbooms due to the Dazzlings' influence, they manipulate her into sabotaging their appearance for their power.

When Trixie is angry at losing to the Rainbooms due to the Dazzlings' influence, they manipulate her into sabotaging their appearance for their power.