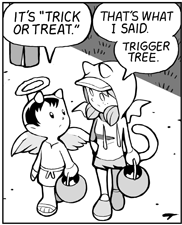 Compare and contrast with Delusions of Eloquence, Blunt Metaphors Trauma, Freudian Slip, [Popular Saying], But..., and My Hovercraft Is Full of Eels. Compare and contrast also with the Spoonerism, where the first letter or syllable is transposed for comedy effect. If the speaker uses the apparently correct words instead but gets hopelessly lost in their train of thought, that's Metaphorgotten. If using the wrong word is the result of mishearing the correct word, that's a Mondegreen Gag. Rouge Angles of Satin is this trope in written form.

Thanks for visiting TB Popes!