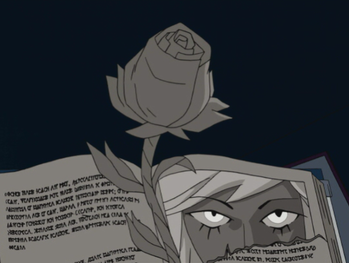 Do you have the bookmark to his heart?
The online version of the Stalker with a Crush... only this guy happens to be a little less than human. The Mailer Daemon can be a cultist, a vampire, a demon or some other supernatural critter intent on eating, ritually sacrificing, brainwashing, or "marrying" the hapless heroine.

Over the course of an episode, he'll woo the heroine, getting her absorbed in online chatting and games, and convincing her that this godsend of true love, who curiously refuses to send his picture, is her Love at First Sight... well, read. She'll trust him completely with all sorts of secrets, personal and dangerous. Her friends might try to urge her to be cautious, but she'll think "You're Just Jealous" and grow distant from them; this is usually a thought the Daemon plants and fosters to alienate her and make her easier to seduce and lure. He'll eventually persuade her to come meet him in the Haunted Castle or Mad Scientist Laboratory, only to reveal himself in his true form.

All things considered, it's awfully insensitive and hypocritical of her to be so judgmental of others' appearances. The Mailer Daemon does this because he could never interact socially with the heroine without the Internet (he might not even be capable of human speech!) and uses this tactic to lure her into his clutches.

If the Mailer Daemon wants her to love/marry him, he will do his best to seduce her to The Dark Side with a Circling Monologue. If he fails, or isn't interested in companionship, the fangs come out and it's feeding time! (or chaos ensues).

This kind of episode usually ends in An Aesop about not trusting people on the Internet, at least not blindly, and not shutting yourself off from real people in favor of "imaginary" people (who are all stalkers) on the Web.

Other variations include using a Great Big Book of Everything instead of a PC, or having the Daemon communicate while being trapped in Another Dimension, and asking the heroine to use Summon Magic to bring him over for face to snout chat.

The trope name refers to "Daemon", a real piece of computing lingo. "Mailer Daemon" usually refers to an automatic process that runs in the background and handles incoming email messages.

Not to be confused with Data Vampires, Daemon, any supernatural creatures that go by "daemon", or Matt Damon.

If this takes for a short amount of time, it is a kind of Prank Date.

open/close all folders
Anime and Manga
Comic Books
Literature
Live-Action TV
Tabletop Games
Video Games
Webcomics
Web Original
Western Animation
Real Life
None of those other articles love you like I do.