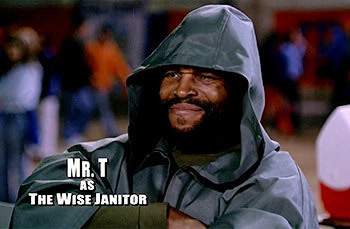 I'm the Wise Janitor. I impart knowledge and help overcome fears, foo'!
"Hey, this is the Magical Negro. Like in the movies, where the black character is just there to help the white guy on his journey. And he mainly speaks in folksy sayings. 'I don't know much about blah blah. But a man's gotta have his blah.'"
— Kenneth, Speechless
Advertisement:

Bonus points if this character is a priest of Vodoun. If female, they will nearly always also be a Sassy Black Woman.

Elroy schmoozes with a mostly-white crowd by defaulting to just encouraging them, aware that his race and age make it easy.

Elroy schmoozes with a mostly-white crowd by defaulting to just encouraging them, aware that his race and age make it easy.