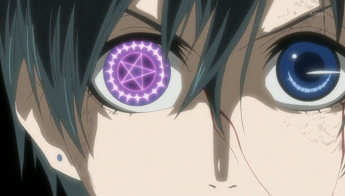 Your small frame belies your immense greed. Well then! The mark shall reside on that great big eye of yours, which reflects a hopeless world!
"You don't know of the illusion that the whole world could perish in an instant.
That is what it means to see death.
These eyes, this power isn't something you can boast about like you did."
— Shiki Tohno, Tsukihime (game)
Advertisement:

One or both of a character's eyes have great supernatural power. Usually, the eye grants the user power over perception, either the target's (illusion, mind control) or the user's (telepathy, premonitions, clairvoyance, etc). In most cases, direct eye contact or at the very least line-of-sight is required. Other restrictions may apply.

If only one eye has magical abilities, an Eyepatch of Power is very likely, especially if this eye possesses a distinct look, like color or shape (which might only appear during active use). The Magical Eye is often used as an excuse to apply certain patterns or symbols to a particular power, therefore making it Cool and Symbolic. Even more symbolic, the eye possessing the power is almost always the character's left eye (the left eye is considered the "sinister" eye, as "sinister" was once a word for "left"). Furthermore, the "uniqueness" of the Magical Eye compared to its more mundane non-magical counterpart can serve as a Duality Motif, symbolically highlighting a contrast in its bearer's own character. Closely related to the Red Right Hand.

Magical eyes can be any color, but are usually glowing unusual colors like Red Eyes, Take Warning or two colors at once.

See also Eye Beams for a more directly offensive use of eyes. A Third Eye is usually magical as part of its symbolism. If the magical eye can cause hypnosis, it's a Hypnotic Eye. Do not confuse with Faceless Eye or the more mundane Death Glare. Compare Excessive Evil Eyeshadow. The technological equivalent is Electronic Eyes. No relation to Magic Eye, that autostereogram thing where if you look at it just right, you can see a cat or a dolphin or whatever.