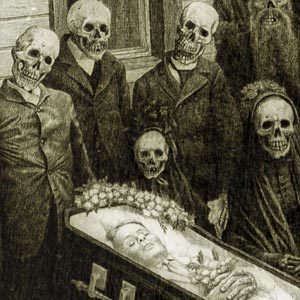 Edith being mourned by her boneheaded friends.
"It was as if God had decided to put to the test every capacity for surprise... to such an extreme that no-one knew for certain where the limits of reality lay. It was an intricate stew of truths and mirages that convulsed the ghost of José Arcadio Buendía with impatience and made him wander all through the house even in broad daylight."
— Gabriel García Márquez (after the arrival of the railroad, when dozens of new inventions — the phonograph, the telephone, the electric lightbulb — flooded Macondo), One Hundred Years of Solitude
Advertisement:

In Magic Realism, events just happen, as in dreams. Tchotchkes telling the heroine what to do (Wonderfalls) or the ghost of your father showing up at odd intervals to offer personal and/or professional advice (Due South). Or perhaps it's just a quirky vibe that infuses the environment (Northern Exposure, Twin Peaks). Magical realism is a story that takes place in a realistic setting that is recognizable as the historical past or present. It overlaps with Mundane Fantastic. It has a connection to surrealism, dream logic, and poetry.

like Fantasy and Science Fiction. On the other hand, the inclusion of well-written magical realism into the canons of Lit Fic is historically well supported, as Latin America's major 20th-century authors mostly wrote in this genre. The literary world outside of Latin America so closely associates the region with magical realism that the McOndo movement (for which see below) exists chiefly to prove that not everything literary that comes from Latin America involves magic and angels. Also, the way that religious and horror fiction are distinct enough to be distinguished from fantasy even when they fit its basic definition of containing unscientific elements, the same is true for magical realism.

One Hundred Years of Solitude, Midnight’s Children, and Beloved are defining examples of magical realism.

Rule of thumb: Say there are vampires in New York.

From another perspective, it is possible to interpret many non-fantasy musicals by definition as magical realism, since spontaneously breaking into song with invisible accompaniment gets taken as a perfectly normal thing, although there are a few exceptions where the incongruity is lampshaded, the most notable recent example being Enchanted. (See Musical World Hypotheses for other interpretations.) Or the singing could be taken as just a symbolic representation of the characters thoughts and speeches and not at face value over what they actually said. If the unnatural events happen in only a couple of episodes in an otherwise grounded series, like say a Dom Com, they can lead viewers to exclaiming How Unscientific!.

For when it's ambiguous, as in Kafka's The Metamorphosis where the protagonist has either actually turned into an insect or just gone insane, see Maybe Magic, Maybe Mundane and Unreliable Narrator. Compare/contrast with Like Reality, Unless Noted, as well as Low Fantasy.