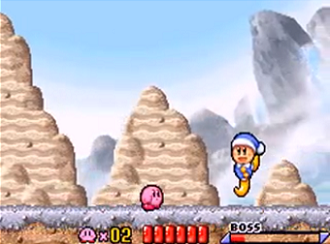 "Who gives a damn about you? Your new name is 'Mid-Boss'."
— Laharl, Disgaea: Hour of Darkness, giving his opinion of Vyers The Dark Adonis

A Mini-Boss, Sub Boss or Mid Boss is a distinct, generally unique, stronger-than-average monster that you encounter usually halfway to two-thirds through the level/dungeon/etc. It is noteworthy because it's tougher than any ordinary enemy (and isn't encountered under normal conditions like a Giant Mook), yet it still isn't as strong as the actual boss that awaits you at the end. In story terms, the mini-boss is often The Dragon to the level boss.