Love You and Everybody 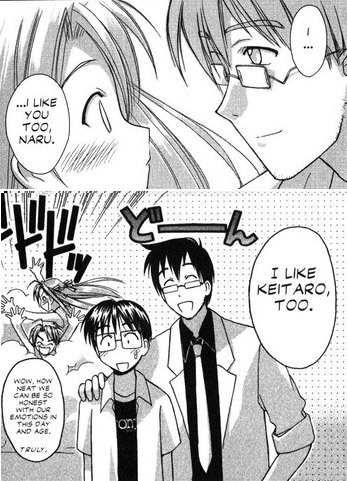 Yup, nothing but platonic feelings here.
Leela: I love every living creature.
Fry: Even me?
Leela: As a friend.
Fry: Damn!
— Futurama
Advertisement:

A standard delaying or misleading tactic of Romantic Comedy that depends on the vagueness of language.

In English we have love for deep romantic love ("I love you, Alice."), or deep platonic love ("I love you, man"), or shallow love of foodstuffs ("God, I love pastrami"). There's also times where romantic affection occurs but is not as deep as love, in which case "love" is considered deeply inappropriate. So you have like, or the rather pubescent like-like which is different from just "like". Confused? Well, it carries over into other languages too. The French can be confused by copain and ami. The German language has a single word Freund for male friend or boyfriend and a single word Freundin for female friend or girlfriend, while daisuki (or the plain, less emphatic form, suki) is a popular word used in anime for affection, but it can be very nebulous out of context (aishiteru, on the other hand, is very clear in its meaning and more or less cannot be taken any other way). Likewise in Spanish, novio/novia can mean "boyfriend/girlfriend," "fiancée," or "groom/bride."

The standard gag is to have a character say this, while the others are shocked at the directness. Or, if it's the person in love with them, near euphoria. This is followed by the original character mentioning all the other people they love.

A variant: a character is thrilled to receive what appears to be something very special and personal (often a valentine or a Christmas present) from the person they have a crush on — only to learn that the entire cast got them.

In some cases this is played for humor, while in other cases the classy character is denying the confession but feigning ignorance to avoid causing the other person embarrassment. One big problem in adaptations for other languages is the subjectivity in deciding which kind of affection is the proper one.

See also The Four Loves. Compare The "I Love You" Stigma.