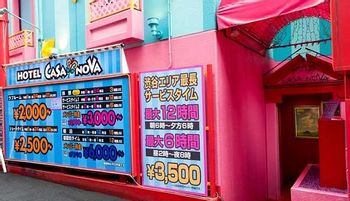 Fitting name.
"Ah, that's where those hotels are."
— Junpei, Persona 3

It's hard to have anything approaching an adult relationship in Japan. Especially the Japan of anime. Once you get past the obstacles of attracting any attention, actually getting around to encountering an amenable romantic interest without blowing it from the get-go, running the gauntlet of finding true love, and sidestepping typical anime romantic obstacles, there is still one surprisingly difficult issue.

Japan is crowded. Japan is expensive (well, Tokyo's expensive, and nowhere else counts, right?note Actually, the rest of the country really isn't a lot better as far as property prices go; see the Anime and Manga section of "Friends" Rent Control.). As a result, even if you're of age to engage in certain physical activities, you probably don't have any private space in which to do that and not get caught. You may even be living with your parents, which is a whole other level of uncomfortable. Even if you can manage a rendezvous, your six-tatami, underlit, cluttered room with the one-person futon isn't likely to inspire romance. And unlike your North American counterparts, you likely don't own a car and only advanced, highly acrobatic positions tend to be possible on a bicycle, even with the kickstand down.

Enter the love hotel. Over the last number of years, the love hotel industry has become quite profitable. They are locations which specialize in providing a place for a couple to have sex.

In the West, hotels of this sort tend to be seedy, quasi-criminal affairs frequented by prostitutes and populated by unsavory characters, or motels far, far outside city limits, reachable only by car and the location of choice for affairs and civil servants (or at least, people who claim to be civil servants). However, classic Japanese discretion and love of commercial pomp have made the typical Japanese hotel a combination of a well-run Holiday Inn, Disneyland, and an upscale adult toy store. Some are quite gaudy on the outside, while many are distinguishable from the outside only by the reduced number and size of windows facing the street. Some of the innovations that might be seen:

Needless to say, love hotels get portrayed with that equivocated attitude that necessary but scandalous things usually inspire. For that reason, the Yakuza sometimes have a habit of camping outside the entrances with cameras, then demanding payment to keep the pictures confined.

Suffice to say that Hikari and Toji's offscreen Relationship Upgrade was more thorough than Asuka had previously imagined.