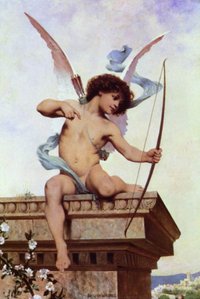 God? Goddess? Doesn't matter, love is all you need.
"A goddess on a mountain top
Was burning like a silver flame
The summit of beauty and love
And Venus was her name
She's got it
Yeah baby, she's got it
Well, I'm your Venus, I'm your fire
At your desire"
— Shocking Blue, "Venus" (later Covered Up by Bananarama)
Advertisement:

The Matchmaker is her God Job; her role in any given plot is most likely to put characters into a relationship. Thus, she is a walking defiance of tropes such as Will They or Won't They? and Twice Shy. Naturally, this does not preclude a Match Maker Crush. She may also be a Fertility God, who either has a bunch of babies herself or encourages others to make them.

Contrast War God, this trope's polar opposite.note Or so you’d think. Ishtar might disagree. And Freya. And Aphrodite Areia. And The Morrigan. Mythology and media in general tend to pair these two up regardless, in a sort of cosmic example of All Girls Want Bad Boys.

Sometimes, they may be depicted with doves (due to their relation with positive concepts).