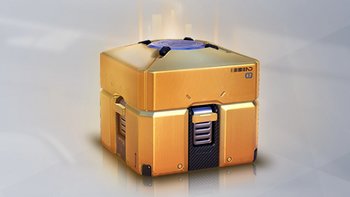 You can have the washer and dryer... or you can trade it all in for what's in the box...
In video games, a "loot box" (often rebranded by publishers as "surprise mechanics" or other euphemisms) is a container with randomized, possibly rare loot. While some are actual boxes within the game world which the Player Character picks up, they tend to be a bit more disconnected — they're often acquired from the game's menu system outside of gameplay (a process that can include Microtransactions), and their "contents" aren't limited to physical items but can include insubstantials like new classes or skins.
Advertisement:

The first clear examples of this mechanic are the Chinese ZT Online (2007) and Canadian FIFA 09 (2008). In East Asia, it would soon come to dominate the mobile and browser gaming markets, where it's known as "gacha" after the toy capsule machines

Loot boxes serve as a point of contention due to many allegedly free games which have hidden real and tangible ways of Bribing Your Way to Victory behind this randomized method of acquisition. It also crept into paid games, with Team Fortress 2 and Counter-Strike: Global Offensive adding skin cases and the like.note though TF2 would transition to free-to-play a few months later, while Global Offensive would go Free to Play six years later Eventually governments would start investigating whether they should be regulated as gambling — Japan has banned one particularly addictive form of the mechanic since 2012, and a 2016 Chinese ruling banned paid lootboxes completely, though both laws were filled with loopholes (such as how for the former, buying lootbox grants exclusive tokens to be used to purchase desirable prizes on display or to upgrade existing characters, and for the latter, lootboxes are technically not bought with real money, but additional in-game currency required to buy those lootboxes can be bought quicker with real money). The widespread backlash against Star Wars Battlefront II (2017) also lead to many countries in the Western hemisphere taking greater notice, with Belgium, the Netherlands and the Isle of Man implementing restrictions soon after, and the United Kingdom starting an investigation that lead to lootboxes being linked to problem gambling, and regulations are sure to follow with enough evidence.

An additional source of controversy, even among players who don't mind or outright enjoy gambling, is that many game publishers don't reveal the drop rates. Whereas casinos and lotteries in most nations have been legally required to tell you the odds of winning for decades, as of 2021 there's almost never a similar transparency requirement for lootboxes.note Some Asian countries now have laws that require games to list drop rates for blind bag content (including loot boxes), but this hasn't carried over to western games. As such it's usually a mystery what your actual chances are of getting the prize you want out of a lootbox. Though "very low" is usually a safe guess. Some publishers now voluntarily disclose the odds in response to player backlash, but many still keep it a closely-guarded secret. In the latter case, buying loot boxes is more similar to gambling in an illegal casino than in a legitimate one.