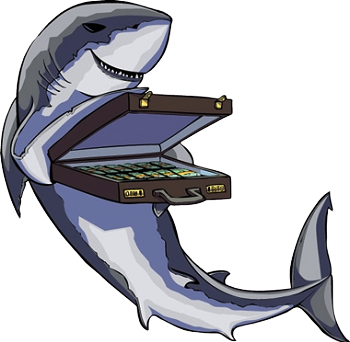 Pay up, I got fish to fry.
"I needed money for some new chainmail so that I could survive the run through Blackfire Pass, so I took a loan from Bruno Ballcrusher back in Marienburg. Orcs massacred the caravan and now I'm impotent and live in a cell with a pedophile, a serial rapist and an elf."
— Warhammer Fantasy Roleplay
Advertisement:

A Loan Shark is a stock villain who typically loans money at high interest rates and will stop at nothing to get it back. The loan shark may be only too eager to use violence if necessary. He may also have mob connections, as money-lending is a time-honored means for organized crime to use money gotten from any number of less-than-honest means, and the hounding of their victims for payment and interest is just another means of extortion. In some cases, a loan shark will be reluctant to kill a debtor because a corpse can't pay its dues, while other times the loan shark would be gleeful to cut them into pieces so they can put their rare, precious organs on the black market. Of course, the loan shark may decide to make use of the debtor for a job or caper that offers a huge payoff but requires the debtor's skill, they will consider the borrower's debt paid if done well, but with blackmail usually involved. If you do somehow get square with the loan shark, you were likely privy to illegal activity during the deal, and the loan shark may decide to kill you because you're a loose end after you've paid your dues.

Loan sharks feature a lot in action movies, where they're usually tied to The Mafia, The Triads and the Tongs, the Yakuza or whatever other organized crime group features as the primary villain of the piece. Typically, the person being hounded by the loan sharks is someone who ran up a nasty gambling debt or needed money for some other reason and had nowhere else to turn, and now they are putting the heat on him to get their money back (with interest) and the borrower is unable to pay. Enter the hero, who is usually a friend of the borrower, who comes across the loan sharks doing their bit of nasty, beats the crap out of them and sends them packing. The loan sharks get pissed and the conflict ensues.

Unfortunately, this is Truth in Television (although some real-life Loan Sharks can be more flexible than others), and some high schools show videos warning students about the dangers of borrowing from loan sharks. Actual banks, within the United States and its allies at least, do not operate under this trope and will in fact often accept pennies on the dollar rather than have to repossess cars and houses. Bankers do not want to own your collateral because they tend to have trouble selling it to get their money (doing so was what caused the sub-prime mortgage crisis and subsequent "Great Recession" of 2008) and even in boom markets, owning property to sell is often costlier than most banks want to deal with. Also of note is payday lending, which, due to its legality in the US, does not involve violence but is less lenient than banks.

Sometimes involves a Morally Bankrupt Banker. May resemble a Deal with the Devil, as the two often overlap.