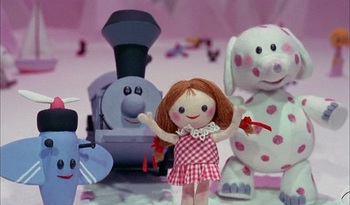 Woody: YOU! ARE! A! TOYYYY!! You're not the real Buzz Lightyear; you... you're an action figure! You are a child's plaything!
[Beat]
Buzz: You are a sad, strange little man—and you have my pity.
— Toy Story
Advertisement:

We say "almost", because in some cases, these toys come alive only when NPCs aren't around. There may be an official or unofficial Masquerade in effect. Other times, they're created only because Love Imbues Life. Still, nothing says Fun for the Whole Family like Living Toys!

Warning: This product may turn evil, or at the very least, creepy. Horror Movie characters and characters from horror movie parodies should avoid purchasing and/or using Living Toys. May contain small parts not suitable for children under 6. Requires 2 AA Batteries, magic talisman or evil curse. Cool accessories not included. Do not discard, or product may turn into a Vengeful Abandoned Toy. Under said circumstances, Trope Co. assumes no legal responsibility for hauntings, injuries, or deaths caused by our product.

Make sure the "good/evil" switch is set to "good" at all times. Should they be actual weapons, any damage they cause is not covered by warranty.