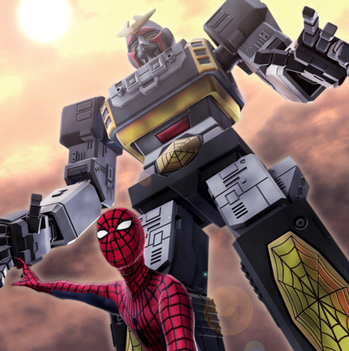 It's just your Friendly Neighborhood Spider-Man with a GIANT ROBOT. Nothing wrong here.
Advertisement:

IMPORTANT: This has to be a direct recycling of a premise, or follow up to a work. Simply having some similarities to another show is not this trope.

Whenever a work isn't about Humongous Mecha, a work might redo the premise (usually a Spinoff, Spiritual Successor, or Follow the Leader), that is largely about them.

Say there is an old fairy tale about a good spirit that has to stop a horde of The Fair Folk from invading a village. Then someone makes an adaptation where the fair folk are aliens that pilot giant robots, and the good spirit turns out to be the only one who can pilot the Super Prototype and save Earth.

Note that almost all other mecha related tropes can apply, as long as the previous/source work did not have mecha.

A Sub-Trope of Recycled Premise.