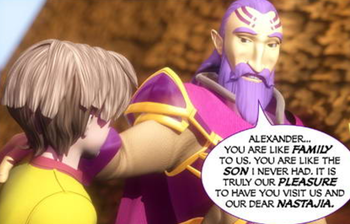 A character tells another that they're like a son or daughter to them, possibly even "the son/daughter I never had."

This is common with mentors who have a similar role to raise and educate their students as parents. A sufficently tight-knit Master-Apprentice Chain can look like a multi-generational family.

A character would absolutely kill to hear this from their "Well Done, Son!" Guy/"Well Done, Daughter!" Girl, if they've got one.

Compare Parental Substitute and Happily Adopted for situations where this could occur and A Father to His Men for military examples. See also Like Brother and Sister. Also Why Are You Not My Son?, where a character has actual offspring or relatives they dislike, and compare them with someone that's Like a Son/Daughter to Them.

Frequently a form of So Proud of You and may result in a Platonic Declaration of Love. If the mentor decides to make the relationship official, this may result in an Adult Adoptee (if the student is already of age).

Contrast I Have No Son!/Daughter!.