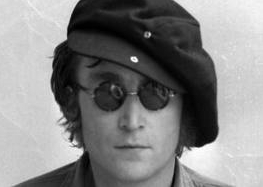 Lennon Specs is a type of sunglasses with perfectly round lenses, preferably black or red, made famous by John Lennon. They are more commonly worn by beatniks, hippies and - since they are uncommon and noticeable - unconventional but notable characters. Thanks to John Lone in The Last Emperor, they're known as 'Pu Yi' glasses in Chinese-speaking countries. note For some reason, these characters tend to be collaborationist traitors (especially when they are worn together with a changshan and a fedora) in Chinese historical films.

A subtrope of Cool Shades. See also Triangle Shades. Furthermore, please note that perfectly round but clear glasses, despite also having been worn by John Lennon, do not fall under this trope (those would be Potter Specs). Neither do oval sunglasses, square-ish sunglasses with rounded edges, or any other type of sunglasses with less than perfectly round lenses. note The original glasses were a pair of Salvation Army eyeglasses John Lennon first wore in 1966 after The Beatles' last American tour came to an end, as John was in Almeria, Spain, filming his role as Private Gripweed in Richard Lester's surreal comedy, How I Won The War. They were the first pair Lennon wore regularly in public from that point on (Lennon was legally blind without them).