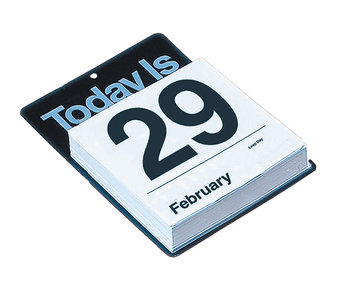 The twenty-ninth day of February comes only once every four years note except for years divisible by 100 but not 400. As the only date in the calendar that doesn't occur in every year, it has some comedic potential, especially when it's someone's birthday: Any event happening on someone's "Xth birthday" won't actually happen until he's 4 times X years old note plus another 4 years if crossing a century non-leap year. People born on this day are known as "leapers" or "leaplings."

This can be a hassle if said character wants to celebrate their birthday every year. One way to do this is to celebrate it on February 28 (since they were not born in March) or March 1 so technically they'd still 'age' normally. This is what legal jurisdictions will do for the purposes of determining when someone reaches the age of majority, though whether it's the day before or after depends: the UK and Hong Kong consider March 1 as the day for leapers, while New Zealand and Taiwan use February 28.

February 29 is also known as Bachelor's Day, the day on which, by tradition, women were allowed to propose marriage to a man in Ireland. It was also chosen as the day for rare diseases awareness.