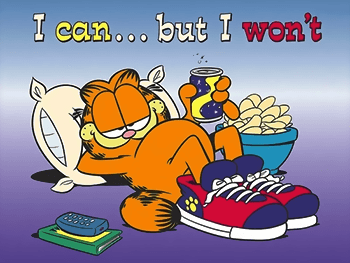 Joe: I could do a lot of things if it was necessary.
Queenie: Then why don't you?
Joe: It ain't necessary.
— Show Boat (1936)
Advertisement:

A Lazy Bum is very rare. Just ask anybody if they're lazy. They may be Brilliant, but Lazy, or Book Dumb, or shrewdly saving their energy, but they're not just plain lazy. They work hard, really, or at least they could if it was worth the effort to do it, but they're not lazy. The only people who think they aren't working are their fascist bosses. Got it? In fact, if you asked these hard-working people about their co-workers, you'd realize that they're the only ones who do any work around here.

Of course, every now and then you get a Lazy Bum who is more self-aware. These tend to be Smug Snakes who think it's hilarious that other people bother to do work instead of just leeching. Then there are the ones who are really self-aware, and almost philosophically devoted to being lazy. They scheme so hard at getting out of work that it's actually harder work than just doing the work. Usually their boss is a humorless Control Freak who is so annoying that we root for the worthless slacker instead.

A more metaphorical example of this trope would be moral laziness. Usually seen in villains, anti-heroes and anti-villains this type of laziness applies to those who "take the easy way out" in a psychological sense. Usually, this includes murder, being an Extreme Doormat, allowing oneself to be easily manipulated, lacking empathy toward others or just lacking the drive and willpower to say "no".

Then there are the ones who are supposed to be sympathetic, because they're just like you. These may be the most common type of all, and there's probably others, but it's too much work to write about them. No doubt Wiki Magic will take care of it.

Being a Lazy Bum — whether in the traditional sense or the metaphorical one of moral laziness — is also known as Sloth, which is one of the Seven Deadly Sins. Not to be confused with the South American mammal, which is named "sloth" because it sleeps a lot and moves very slowly even when it's awake. Compare The Slacker.