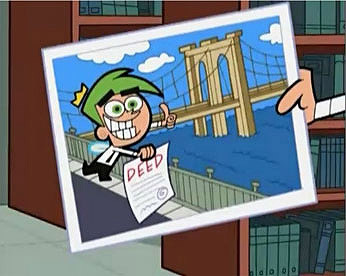 "So that's what con means. I've been wondering ever since that guy sold me the Brooklyn Bridge."
— Cosmo, The Fairly OddParents
Advertisement:

The Con Artist pretends he has the ownership rights to a particular public building (the Eiffel Tower or the Sydney Opera House are good ones) and sells the building to the mark, who will then show up with bulldozers or whatever. In America, the Brooklyn Bridge is a common target.

You may also find a landmark for sale at Honest John's Dealership, or peddled by a Snake Oil Salesman.

So well-known that it's also common for people to express incredulity with some variation of "And if you believe that, I have a bridge to sell you..." Or And I'm the Queen of Sheba.

It's also common to recommend buying what will become "ocean-front property in Nevada," as soon as the earthquake that causes California to break off and fall in the ocean happens.

Truth in Television in the early 20th century, as it's a Real Estate Scam. Yes, there were actually people who were stupid enough.note  The attempt to sell the Eiffel Tower was helped by the fact that the tower was originally meant to be a temporary structure, so it wasn't too surprising that a company would be allowed to buy it, dismantle it, and use it for scrap metal. Furthermore, the people "selling" the Brooklyn Bridge were not literally selling the bridge (and expecting the buyers to take the structure home with them); instead they were selling the contract to collect tolls over it. So yes, not as stupid as most fictional examples, who do not even have a whole show of governmental officials who want to do it discreetly.

See Also: Rushmore Refacement, Pig in a Poke, Too Good to Be True.

Alternative Title(s): I Have A Bridge To Sell You