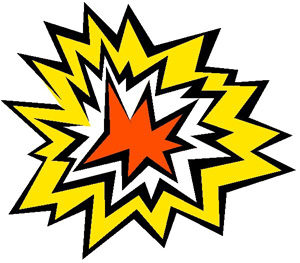 This is your standard Limited Animation method of drawing an explosion: as a spikey ball. Usually several such, concentric and multi-colored. Expect some smoke too.

This effect can also be used to accentuate any heavy or significant impact, such as a blow to the head. See also Hit Spark.

In Real Life, of course, it's possible to achieve an explosion which simulates this effect. Only, usually, not as colorful as in the cartoons.

If you don't know what a Koosh Ball

is, basically it's a ball of rubber spaghetti used as a safer alternative to rubber balls when soft impacts are desired and bouncing is not. "Koosh" represents the sound effect the thing makes when it hits a surface.

Not to be confused with Happy Fun Ball.