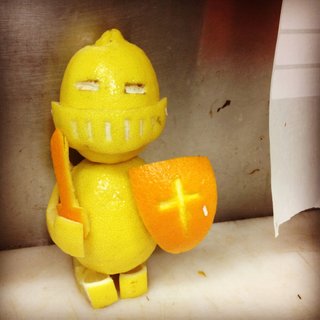 When life gives you lemons... You make armour from it.
"Ernest Hemingway once wrote, 'The world is a fine place and worth fighting for.' I agree with the second part."
— William Somerset, Se7en
Advertisement:

There's a reason the Knight in Shining Armor needs the shining armor—and the weapons.

The world is filled with Wide Eyed Idealists who believe in truth and justice and devote their lives to fighting for it. And then the dark, cruel and brutal world keeps letting them down. For them, Being Good Sucks. But rather than giving up on their goals, they choose to fight not because they believe they will truly make a difference, but because it's the right thing to do.

More often than not these characters are in settings that feature Black-and-Gray Morality.note It's also common for Black-and-White Morality and even White-and-Grey Morality as well. They're usually survivors who have largely given up on believing in Honor Before Reason, but still strive to be Lawful Good or as close to it as reality allows them to be. They are willing to bend the rules to save them. In Lighter and Softer settings, these characters are Grumpy Bears and are often mocked by the other characters for being so sour all the time.

The presence of cynicism usually makes the idealistic behavior even more noteworthy: it's easy to love everyone when Rousseau Was Right, but you really have to be a good guy to believe that Humans Are Bastards and care about them anyway. Such characters can also be The Fettered; their cynical outlook tells them they could probably get away with all kinds of things that they don't do because that would be wrong, and just because the world sucks doesn't mean you need to make it worse. Then again, this kind of character goes great with a world where you Earn Your Happy Ending after much strife.

This is the inverse of the worldview of most Well Intentioned Extremists, especially those who believe that Utopia Justifies the Means. Extremists or Knight Templars may believe themselves to be this, but their actions are far too extreme. A Knight In Sour Armor believes in the rules and breaks them only when absolutely necessary, which is very rarely; not surprisingly, many have taken a Heroic Vow related to this behavior. Often has a personal set of rules, trimmed down to those that really matter in order to minimize conflicts and distractions. Contributes to the Knight's gruff tendencies, since politeness tends to appear a lot further down the priority list than feeding orphans and so on.

Generally, these characters fit one of two personality types. Members of the first type are former Wide Eyed Idealists who have come to accept that their world is on the cynical end of the Sliding Scale of Idealism Versus Cynicism, but who still find something beautiful in their former ideals that they want to hold on to. Those of the second type are born cynics, who would make natural Jerkass antiheroes, but who nevertheless have devoted themselves to a code of honor or fair play. In either case, these people tend to have gone through (often painful) Character Development in their past, meaning that they are normally older than the average hero.

Either way, however, the effect is basically the same: you have a Knight in Shining Armor wearing Jade-Colored Glasses; the difference between the first and second types is which comes first.

These characters show up often in Film Noir, Dark Fantasy, and Low Fantasy. Law enforcement is a particularly attractive career, but the Knight in Sour Armor will usually hold back from becoming a Cowboy Cop. Very frequently, they end up as The Mentor, a Mentor in Sour Armor, a Grumpy Bear with Jade-Colored Glasses, The Last DJ, or a Cool Old Guy if they last long enough. As teammates, they are often the Sour Supporter. They also frequently end up as Hero Antagonists and extreme Woobies. This is often the final state of The Atoner post-Heel–Face Turn. Despite their cynicism, they behave like The Anti-Nihilist.

Will often overlap with The Snark Knight. Compare Angst? What Angst?, for characters who take the troubles of a good alignment with far less complaint; Noble Demon, who will proudly declare themselves evil, but still finds themselves doing good once in a while; Sour Outside, Sad Inside, for characters whose sour attitude hides the fact they're sad; and Jerkass Woobie, who spits in the face of the alignment chart. Also see Iron Woobie if they continue the good fight in spite of their pain, and Stoic Woobie if they hide their pain through Stoicism. Converted Silly Rabbit, Idealism Is for Kids! or Good Is Old-Fashioned believers may well find themselves becoming this trope if the heroes can bring them around. If they don't like idealism, but don't like cynicism, either, then you also have a touch of Silly Rabbit, Cynicism Is for Losers!