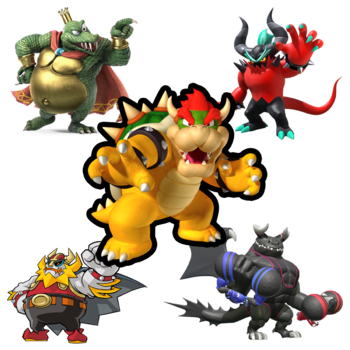 A creepy collection of callous creatures! note Clockwise from top left: King K. Rool, Zavok, Dragaux, the Shake King, and Bowser himself in the middle.
"This guy is to Donkey Kong what Bowser is to Mario. This crowned Kremling has a serious attitude problem."
— Super Smash Bros. for Wii U, on King K. Rool's trophy
Advertisement:

King Koopa Copy. Try to say that really fast. It seems that the Super Mario Bros.' archnemesis, King Bowser Koopa, serves as the inspiration for many villains in other video games.

There are two main reasons for this: One, simply that the Mario franchise is so well known that most creators know enough about Bowser to base these characters on him. Bowser is one of the first, and certainly one of the most long-running video game villains. It also certainly helps that the game in which he debuted was released in The '80s, when most people who are creators in The New '10s and The New '20s were kids, and likely to play the game and remember its antagonist. Two, he uses many tropes associated with villainy (An Obviously Evil appearance, a fire motif, a menacing growl, etc.) For this reason, Bowser is kind of a go-to inspiration when designing a villain for a video game, or anything else.

The classic fairy-tale dragon, a gigantic, spiky, fire-breathing reptilian monster that kidnaps and guards princesses in a cave or a castle, is one of the main inspirations for characters like these. The Big Red Devil is another major inspiration, being bulky, horned and ruling over a Fire and Brimstone Hell, occasionally aided by an army of demonic minions. This trope also shares some similarities with the Not Zilla, as the characters that inspired both tropes are large, roaring, monstrous reptiles.

Subtrope of Fountain of Expies. Not to be confused with King Kong Copy (who is also large, scary, monstrous, and often kidnaps women, but that's where the similarities end).