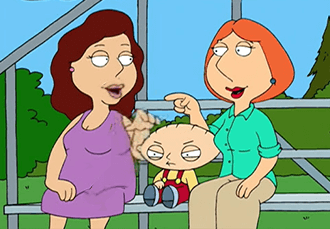 Bonnie: I tried everything to get the stain out...
Lois: What about lemon juice?
Bonnie: Oh, what about club soda?
Stewie: ... what about SHUTTING THE HELL UP?
— Family Guy

So a kid is with some adult, often a parent or other kind of guardian, and said adult is having a conversation with another adult. The kid wants to get out of there, and might ask said adults to cut the conversation short, or alternatively, might go off on his or her own for a little while depending on their age and circumstances.