Kid from the Future 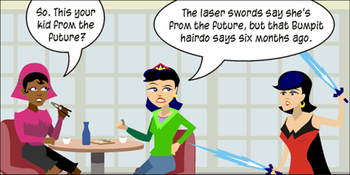 "If I could time-travel, I'd go back to the night my parents conceived me. I would just run into the room and smack my dad on the ass — Wham! 'I'm your son from the future!!' Aahhh-hahahaha!!!"
— Dane Cook
Advertisement:

Surprise! Two of the main characters have just had a child! I bet you are surprised since they didn't go through pregnancy or anything, might not even be dating, and the kid is already 14!

It must be the Kid from the Future here to Set Right What Once Went Wrong! A child the characters have yet to have has traveled back in time to save their parents for some reason. Great for pairing up characters who have yet to even show any interest in each other since now they must get together Because Destiny Says So. Also a way of working in a Distant Finale into the plot of what has already come along.

If the series involves a Love Triangle, or, worse yet, an Unwanted Harem, expect all hell to break loose as those involved try to figure out who the child's mother or father is.

This trope is also used in fanfiction (especially Fix Fics), often to push together the author's OTP, pair the Canon Foreigner with her chosen love interest, or even as the origin for the Author Avatar.

An extreme form of Plot-Relevant Age-Up. Can develop into a full-blown Spin-Offspring. The inverse is Living Distant Ancestor when someone lives long enough to meet their distant descendants through either immortality or time travel in a forward direction.

Sometimes it is played to be a grandson or descendant of the characters, or it is the protagonist who travels back in time, being the son of the future.

This trope is one possible reason for having a Supernaturally Young Parent.

Wataru's kid from the future, Masao, interrupts Keisuke and Megumi's wedding to warn everybody of the Neo Fangires. All the Riders and Arms Monsters transform and leap to face this new challenge.

Wataru's kid from the future, Masao, interrupts Keisuke and Megumi's wedding to warn everybody of the Neo Fangires. All the Riders and Arms Monsters transform and leap to face this new challenge.