Kid Amid the Chaos
aka: Crying Little Kid 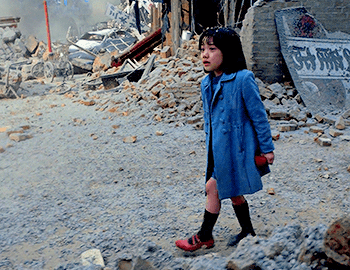 "Never get involved... except when children are crying."
— The Doctor, Doctor Who, "The Beast Below"
Advertisement:

When a town or city faces disaster, there will be a small child, usually but not always under 10 years of age, that for whatever reason will have become separated from their parents. Luckily, someone steps in the way and saves the child before they get hit/shot/whatever.

Not to be confused with the Littlest Cancer Patient, who is often the focus for (often) an entire episode. A Kid Amid the Chaos is only on screen for a few seconds. Although they both try to make the audience go "Aww, that's sad".