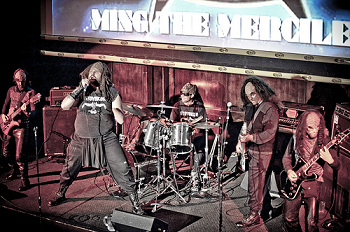 Today is a good day to ROCK!
Pink isn't well, he's stayed back at the hotel
And they sent us along as a surrogate band
We're gonna find out where you fans really stand!
— "In the Flesh", The Wall
Advertisement:

The band is real, but the singer is a more or less fictional character. Same may go for the rest of the band.

Just like with wrestlers, a Kayfabe singer's real identity may be an open secret. That is, not secret at all but not polite to talk about in context. The fans are likely to be outraged if the singer goes out of character during an interview.

Compare "Kayfabe" from Professional Wrestling. One subtrope is Robot or Spaceman Alter Ego. Contrast Anonymous Band, where the musicians simply hide their identities, and Fake Band, where the band itself is fictional. May not always have a "Concept Album", but you can sometimes expect the band's lore and backstory to be told through concept albums if they do have one.