Jumping the Shark
aka: Jumps The Shark 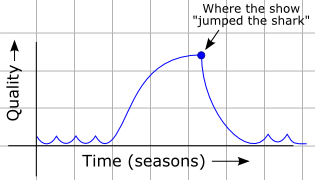 As you can see, the telltale trail becomes noticeable only in hindsight...
Advertisement:

Jumping the Shark is the moment when an established Long Runner series changes in a significant manner, ranging from a new gimmick to a full Retool. This can be the result of circumstance, though it's more often an attempt to overcome flagging ratings and/or attract new viewers. Unfortunately, it doesn't work; looking back, viewers realize that the change actually caused or hastened the show's demise.

The expression comes from an episode of the TV series Happy Days in which Fonzie, dressed in his trademark leather jacket, literally jumps over a shark while on waterskis. The moment was considered over-the-top and not keeping with the show's existing tone of examining everyday life in 1950s America. It was the moment where Fonzie, at that point the Ensemble Dark Horse, started being Flanderized into a superhuman, impossibly 'cool' dude. In short order, Fonzie had pushed out the existing leads to take over the entire show. Even those who liked Fonzie — and most did — had to admit that the show focusing just on him didn't make Happy Days better. It even betrayed Fonzie's own character development: in a landmark earlier episode, Fonzie had been seriously injured while jumping his motorcycle for a televised stunt, and he admitted at the time that he was stupid to try something so reckless. When he jumped the shark, Fonzie seemingly forgot that important lesson, and viewers read it as a sign that the show was abandoning its roots in an effort to stay fresh.

"Jumping the shark" has since entered common parlance to refer to the moment when a serialized work or body of work goes into unrecoverable decline. The term was originally coined in the mid-1980s by writer Jon Hein. Notably, it was only after Happy Days ended that anyone truly realised what the turning point had been; it's difficult to spot a work jumping the shark in real time. The term "jumping the shark" is also rather nebulous because it can either mean the point at which the show started sliding (which is what happened with Happy Days) or the point of the show's final collapse. Complicating matters is the term "nuking the fridge", named after an infamous scene in Indiana Jones and the Kingdom of the Crystal Skull, whose definition seems to drift around even more than "jumping the shark" but basically amounts to "jumping the shark but for movies"; it seems to have been born out of a generation who never experienced Happy Days now having their own experience with how frustrating this is.note TV Tropes does not consider "Nuking the Fridge" a separate or well-defined concept from "Jumping the Shark" — in fact, "Nuking the Fridge" as a separate trope and as a redirect to this trope is a member of the Permanent Red Link Club because people kept trying to add it without being able to define it.

When a show jumps the shark, it is often used for a last gasp, a drastic change to stay on the air which doesn't work. But a shark jump doesn't necessarily mean a quick death — Happy Days went on for seven years after Fonzie's shark-jumping stunt, with other changes in cast and situations. It was just really boring. It's entirely possible for a show to jump several sharks during its twilight years, leading to what we call Seasonal Rot.

It's difficult to define a shark jump, especially given how commonly the term is used for complaining about plot twists you don't like. But there are a lot of telltale signs, and if you see them, the show had better have some really good writers to make it seem like a worthwhile decision.

Contrast Growing the Beard, when a show gets better over time (though they may sometimes overlap. See below.). For a related phenomenon, see Franchise Original Sin. When it's whole networks instead of just shows, see Network Decay; for print magazines, see Magazine Decay. When a work gets its act together and regains its fandom even after such an event, see Win Back the Crowd and Sophomore Slump.

When the people start claiming something's a shark-jumping moment immediately after it happens, see Ruined FOREVER.