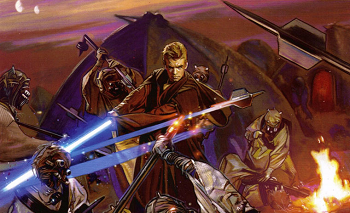 "Fear is the path to the Dark Side. Fear leads to anger, anger leads to hate, hate... leads to suffering."
"All it takes is one bad day to reduce the sanest man alive to lunacy. That's how far the world is from where I am. Just one bad day."
— The Joker, The Killing Joke
Advertisement:

Jumping off the slippery slope is when a morally ambiguous character raises an ethical question by doing morally ambiguous things, but instead of answering those questions, the character closes the debate by going on to do something unquestionably and unforgivably evil. The actions remain pretty much ambiguous, while the character himself no longer is. It turns out that the character's point of view and ideology was more warped than what their initial actions suggested.

This is a condensed form of the Slippery Slope Fallacy — instead of Slowly Slipping Into Evil by gradually becoming more evil, they go straight from "may or may not be moral" at the top of the slope to "unquestionably evil" at the bottom, skipping all of the intermediate shades of gray — thus jumping off the slippery slope.

A form of Debate and Switch, because they never really address the question of whether the original ambiguous action was acceptable or not. Also helps to maintain the status quo by ensuring the main characters never question their own morality too closely, thus keeping the more simpler Black-and-White Morality from degrading into Grey-and-Gray Morality, as well as prevent a potential case of Strawman Has a Point. Compare Slowly Slipping Into Evil for a longer, more developed process of going from "ambiguous" to "evil". Compare Face–Heel Turn for when it is a morally good character who turns evil.

Compare with Bait the Dog, Moral Event Horizon, Motive Decay, Aesoptinum, and He Who Fights Monsters. Can be a result of a Well-Intentioned Extremist realizing that there is No Place for Me There and becoming a full-time villain. Frequently accompanied by Then Let Me Be Evil. In case the characters in question were friends prior to Slope-Slipping, it probably triggers We Used to Be Friends. If the slippery slope has been greased with Applied Phlebotinum, that's The Dark Side.