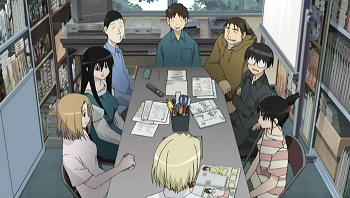 The three most commonly portrayed clubs are the student council, the school newspaper, and the Kendo team. For the student council, see Absurdly Powerful Student Council and Student Council President. For the newspaper, see School Newspaper Newshound. For the Kendo team, see Kendo Team Captain. Other clubs range from normal sport clubs (baseball, soccer, swimming etc.) over cultural clubs (art, tea ceremony, music etc.) and a mixed bunch (library, computer, home economy etc.) to the more unusual (railways, astronomy, occult research etc.). And then there are the clubs no sane school or student council would accept in reality, be it more or less shadowy fan clubs for popular students or just "the place where we hang out, when we are not doing something completely crazy." On a Meta level, there are dozens of anime every year about various school clubs from typical to absurd. An exhaustive list is impossible.

It's rare for a student to be a member of more than one club — School Clubs Are Serious Business in Japan, as they are seen as training for the companies students will eventually join when they enter the adult world. Since company loyalty and longevity are highly prized in the Japanese workforce, it's considered downright rude to devote time to more than one club, or worse, quit one club for another; as a result, you'll rarely see any Extracurricular Enthusiasts in Japanese works. The Ordinary High-School Student who isn't a member of any club is said to be a member of the "Go Home Club". (Usagi and Yaten do this in Sailor Moon when she gets to High School and he becomes a New Transfer Student, as does Watanuki from ×××HOLiC. Kagura from Azumanga Daioh accuses the rest of the girls of this.) If there's a female character member of an all-male sports club, such as the baseball or soccer clubs, she's portrayed as the Cute Sports Club Manager. Characters who are a member of more than one club or who are extremely rapid in recruitment and enthusiasm are usually an Extracurricular Enthusiast.

Sometimes the club is not actually an official club but just an informal group of students with a shared interest; these are called "circles", "societies" or "associations" in real life, but fiction doesn't always make the distinction.