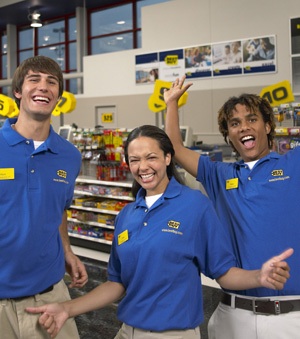 Bob walks into a store. He's a man on a mission. He knows what he wants, and may the good Lord help anyone who stands in his way. But lo and behold, a mob of overly helpful salespeople lay right into him the moment he has his foot in the doorway.

If the salespeople are especially pushy, this may be a sign you're at Honest John's Dealership. It can definitely be Truth in Television, and in case there was any question about it: Yes, they are normally forced to do this as a condition of their job.

Not usually related to It's Raining Men, nor to the song by The Weather Girls.