Is That What They're Calling It Now? 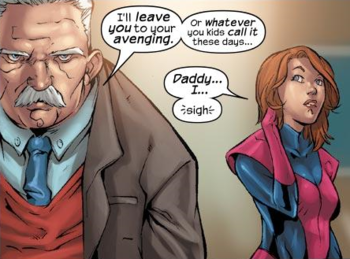 Falling in love with the hired help does not meet with your dad's approval, Jan.
The Doctor: The last I heard you were on a date with Penny. What happened?
Bill: The United Nations Secretary-General.
The Doctor: Awesome.
Bill: No, that wasn't a metaphor.
The Doctor: Good, because I really wasn't following it.
— Doctor Who, "The Pyramid at the End of the World"
Advertisement:

Snarky question used to imply that whatever the previous speaker was describing, the real subject matter at hand is sex:

Sweet Young Thing: ...And I've been lobbying heavily among the trustees to see that this new rule is passed!
Evil Mrs. Calhoun: "Lobbying heavily"? Is that what they're calling it now?

Alternate phrasings include "Is that what you kids are calling it these days?" and "Well, I've never heard it called that before."

While not limited to either gender, it does seem to be applied to eager young females most often, usually by older women who may feel threatened by them.

It is often mixed with Accidental Innuendo, with the original speaker literally describing a perfectly true, innocent situation, and the asker mistaking it for an innuendo because of how odd it is.

This happens in many examples of Truth in Television as well: For example, when Los Angeles mayor Antonio Villaraigosa admitted to having an extramarital affair with a Telemundo reporter who was the Mayor's Office Correspondent for the station, the number of different phrases that "it" could be called expanded into a Hurricane of Euphemisms. ("Covering the mayor's job," "reporting on his affairs," "staying on top of his agenda," "working the beat," etc.)

This can extend to non-sexual subjects, if the subject of the remarker's disapproval is clear. (Kangaroo courts, for example — "We will, of course, be giving you a fair trial." "Oh, is that what you call it?")

See also Have a Gay Old Time and Double Entendre, not to mention "Blackmail" Is Such an Ugly Wordnote I told you not to mention that. Contrast Accidental Innuendo, I Need to Go Iron My Dog. Compare Unusual Euphemism, where they actually are saying something dirty.

To which Lauren Cooper essentially replies, "Are you disrespecting my family?" (For the record, there's no actual evidence the relationship was less than innocent, but Olivia needed a button to push.)

Alternative Title(s): Is That What They Are Calling It Now