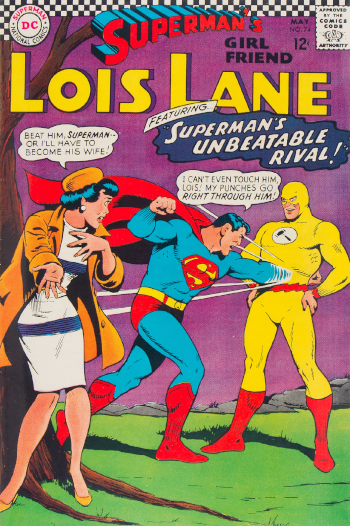 "Did you expect me to dodge? How quaint."
— Olka, mistmeadow witch, Magic: The Gathering flavor text for Turn to Mist

Cousin to invisibility, intangibility refers to a state where a (usually visible) entity cannot interact physically with other matter. Everything just phases through the affected object.

Those questions you have about how this could possibly work? Don't ask them.

A truly intangible person would not be able to stay put on the Earth's surface when the planet's own gravity should be constantly drawing him towards the core. How he or she can generate enough friction and mass to remain on the Earth and move around, let alone grip things if the writer is feeling charitable, is also likely to be ignored (occasionally these problems are avoided by also giving the character the ability to fly). Again, don't ask why.

Asphyxiation is generally not an issue, potential breathing problems due to air passing through lungs are typically ignored outright. If they're stuck in an intangible state for a while, starvation from being unable to pick up food or digest anything usually isn't brought up either. Also, don't expect anyone to know that they shouldn't be able to see anything while intangible, since light would pass straight through their retinas, leaving them unable to create a visual image. You can forget hearing too, air passing though you means nothing registers on the parts of the inner ear that detect sound waves. Also, let's ignore the fact that rendering a part of your body intangible would have the same effect as cutting it off.

Run those same reasons in reverse, and it becomes clear that a truly intangible person would be incredibly boring as he could neither interact with the world nor even be detected by it. Fortunately, these pesky real life physics rules tend to be ignored in-story thanks to Rule of Cool or Hand Waved as some kind of Your Mind Makes It Real effect.

Although intangible characters will pass right through walls, chairs, tables and such, they'll rarely have any problem properly interacting with floors, stairs or any other structures people are meant to walk upon. They may even be able to ride in or on vehicles, with the odds of success rapidly increasing with size. Anything big enough to walk around inside is quite likely, a ship or spaceship is more or less guaranteed.

Note that once we've seen someone walk through the character to establish the parameters of their intangibility, people will go out of their way not to walk through them too often as to keep the need for expensive special effects to a minimum. It's usually Hand Waved as being an intensely creepy experience to see a living person's insides up close.

For a mentor, intangibility is an opportunity. Being a Spirit Advisor or Virtual Ghost lets them accompany the hero into dangerous places without ever being at personal risk.

The ability to render oneself intangible at will occasionally turns up as a superpower. Sometimes the power can work selectively on the user's body (allowing him to voluntarily interact with objects while intangible) or extend further from the user's body (allowing him to make other objects and people intangible) Heroes use this ability to save their teammates from danger. Anti-heroes and villains use it to put their hands through people's chests and squeeze their hearts. It is frequently a given that while no one else can touch them, two characters separately rendered intangible by the same process will have no problem interacting with each other.

A sub-trope is Tragic Intangibility, where this ability is used to say something about how lonely or miserable a character is. See also Projected Man, Astral Projection and Super Smoke.